Law Offices of  Howard A. Kapp

Get off at Western Avenue and go north approximately 4 miles to Wilshire.  Turn right on Wilshire.  Go 1 very short block to Oxford, turn left.  The office is in the Wilshire Colonnade complex, in the west building.  The office is on the Fifth Floor, at the end of the hallway.

First, look for the Sun; it is a medium-sized yellow star located about 25,000 light-years from the center of the Milky Way galaxy.  Earth is the third planet, the one with a very large moon.  You can always recognize Earth: it is the one that has been continuously broadcasting repeat episodes of I Love Lucy for past 60 years or so.

When you arrive in Los Angeles, look for a courthouse and ask for the best trial lawyer in town or to have the individual human "take me to your leader".  It is highly probable that they will give you the coordinates for Mr. Kapp's office.  You will recognize the humans as the bipedal creatures.  Please avoid creatures with 4 or more lower extremities as they will be unable to communicate and may bite you.

Please leave any dangerous pet animals, laser weapons, or microbes behind.  Please remember that the building is designed for the dominant bipedal native humanoids (also known as "Earthers" or "Earthlings") and that very large aliens may not be able to enter the building.  Very small aliens may have difficulty opening the door or pressing the button on the elevator.  Unfortunately, being an extraterrestrial alien is not covered under the Americans With Disabilities Act so the building management has not made any special accommodations for oversized or undersized extraterrestrial aliens.

Please be prepared to modulate your voice patterns to human norms of 85 to 180 Hz (typical adult male) or 165 to 255 Hz (typical female).  Overly loud communications can shake buildings, trigger moderate earthquakes and cause the natives to run around screaming "it's the big one!"

The offices are on the fifth floor of the building.

From Outer Space (for space aliens only):

The offices are on the fifth floor of the building.

Take the Metro (the subway):

Take the Ventura Freeway to the Hollywood Freeway towards downtown.  Get off at Western.  At the offramp, turn left and then a quick right onto Western.  Go south on approximately 4 miles.  Make a left turn on Wilshire and go one block to Oxford.  Turn left on Oxford. The office is the large building at the end of the block, on your left.

The office is located 1 short block east of the intersection of Wilshire Blvd. and Western Avenue.  Generally, the best approach is to take the Santa Monica (10) Freeway to the Western Avenue exit, which is just west of Downtown.  Take the offramp north approximately 4 miles to Wilshire.  Turn right on Wilshire.  Go 1 short block (to Oxford), turn left.  The office is in the Wilshire Collonade complex, in the west building.

From the San Fernando Valley (and points North):

From the City or points West (such as Santa Monica): 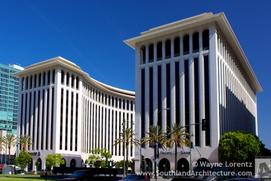 Our offices are on Wilshire Blvd. in the mid-Wilshire district, 1 block east of Western Ave.  (This area is also known as Koreatown.)  The building is the western of twin office buildings known as the Wilshire Colonnade; our building is the one closer to Western Avenue.   Chase Bank is located on the first floor.  Parking can be approached either from Oxford St. (on the west) or Serrano St. (on the east).  There is also street parking, especially if you are willing to walk 1 block to the north or south of the building on Oxford; please see the parking recommendations below.

Lobby entrances are located on Oxford Street and in the center of the complex near the fountains.  The building is across the street from CVS Pharmacy, Denny’s and the landmark Wiltern Theater.  Our building is one short block from the Purple Line and bus stops.

Turn right out of the elevators.  Our offices are on the Fifth Floor at the far end of the hallway, facing Wilshire Blvd.

Directions for Everybody to Law Offices of Howard A. Kapp